Banner: Health and development workers, Pune, India, friends of BODHI and supported in part by us.
If you want to join us please click here. 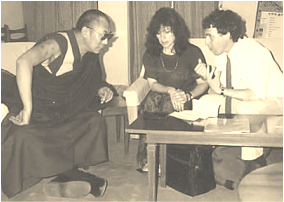 His Holiness XIVth Dalai Lama, 1989 Nobel Peace Laureate, Susan Woldenberg, Colin Butler, Dharamsala, India, 1990 photo: Tenzin Geyche Tethong
Since 2015 this has been the website for the NGO Benevolent Organisation for Development, Health and Insight (BODHI) Australia. Founded in 1989 during teachings by the Dalai Lama in Los Angeles BODHI has supported small scale development projects mainly in India, Bangladesh, Thailand and Tibet. We are possibly the world's fourth  oldest Buddhist development (aid) organisation, following Tzu Chi (founded Taiwan 1966), the Karuna Trust, (UK 1980), and Gaden Relief Projects, (Canada, 1988) (We have ongoing links with three of these groups.) The Jamyang Foundation was also founded in the late 1980s.

"Bodhi" in Sanskrit can be translated as "true nature". "Bodhicitta" means the development of mind ("citta" or awareness) - that wants to be of benefit to all.
BODHI's partners and people are predominantly Buddhist, but not exclusively.
Our main aims are to improve:

Aryaloka Computer Education, based in Nagpur, India (since 2016)
Karunadeepa (Malati Wankhade), Pune, Maharashtra, India (2005 - present) Karunadeepa and her team were part of TBMSG, an organisation which works to improve living conditions for Dalits in India. Their new organisation (2017 - present) is called The Bahujan Hitay Women and Child Welfare Society

ACFID - we are not a member, as we are as yet unconvinced of the benefits, as we place no volunteers overseas and our income is currently too low to justify ACFID's fees.

Access to our audited accounts and other public information is at the Australian Charity and Non-profits Commission (﻿﻿ACNC). You can search for us there by using our ABN: 90575989334

Running costs: BODHI's administration is largely provided by volunteers. Since 2017 we have paid Colin Butler 5% of the total external* income for the previous calendar year. In 2018 that was $1,671. Other running costs (bank charges, audit fee, government charge, website fee, donation for AGM venue) in 2018 totalled $1158. In all, we spent an average of 11% of our total income for 2017-18 on running costs.

*by this, we exclude funds donated by our committee members.