Halfdan Mahler and the warm decade for social justice 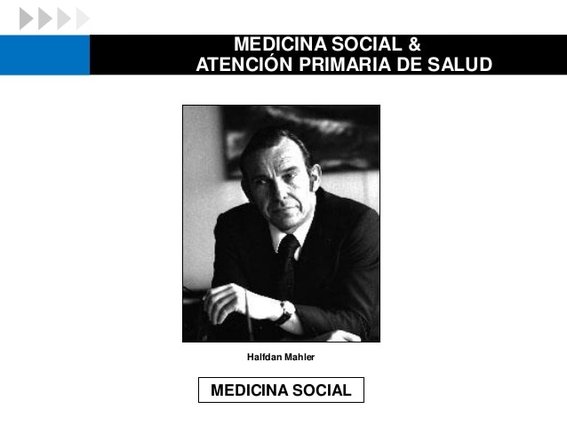 Halfdan Mahler, (who died December 2016) was the third Director-General of the World Health Organization (WHO). This is drawn from an excellent (open access) paper called "Halfdan Mahler: Architect and Defender of the World Health Organization “Health for All by 2000” Declaration of 1978" and another, a long personal reflection by Socrates Litsios,

The origins of primary health care

After training in tuberculosis care and prevention “experience in India convinced Mahler that public health resources in developing countries were biased toward hospital-based medical care and that these priorities had to change.”

Litsios mentions some outlying settings in which complete health coverage is supposed to be achieved by one general purpose dispensary for half a million people, then stating: “During his work in India, Mahler had become convinced that tuberculosis could be successfully treated with ambulatory (non-hospital based) care: “[we went] with tears in our eyes, to the Minister and we said ‘Madame Minister, now that we have shown this you will have to close down all your tuberculosis hospitals because we need the money in order to do ambulatory kind of treatment’ and she looked at me and said ‘you must be a crazy man, even an elephant would cry over your naivete. How do you think I as a politician can close down the hospitals, you must be mad’.”

Primary health care (PHC) at its simplest, is “the place of first contact with a national health care system”. Using this definition, PHC need not be sophisticated, and can be delivered not only by people without university training, but without finishing high school. The most famous example of this were China’s “barefoot doctors", whose benefit is hard to assess, due to the fog of propaganda.
But PHC has a more subtle, subversive meaning. It can also be interpreted as a way to try to improve the social and ecological determinants of health. It is thus political; promoting health for all, or health for the masses, means reducing resources previously available for those with more money and power, many of whom will prefer to be treated in what David Morley called a "disease palace" even if at the cost of better health for those who are poorer.

In 1973, elected WHO director-general, Mahler was able to channel and shape the political and moral currents of the 1970s, which he later called “a warm decade for social justice.” These forces culminated in the 1978 Alma Ata conference when WHO, the United Nations Children’s Fund, and 134 signatory nations declared the goal of “Health for All by 2000” along with strong associated commitments to “development in the spirit of social justice” and to “essential health care” that was “universally accessible” as “an integral part of each country’s health system”.

Neoliberalism and the undermining of the aspiration of Health for All

Almost as soon as the conference was over, major donor nations froze contributions to the WHO budget. The Reagan administration in the US decided to pay only 20% of its assessed contributions to all United Nations agencies (will President Trump follow?) “Selective primary health care”, which differed sharply from the agenda and spirit of Alma-Ata, was born in 1979 and endorsed by the World Bank, the main international donor for health development, dominated by the US, and a vector of neoliberalism - that is of enhancing inequality.

We need a balance between primary and tertiary care

We need a balance between primary and tertiary care. A way forward is to reduce the waste of resources in much tertiary care - such as on people in their last months of life, or on performing tests for the "worried well". But this is also difficult. Tertiary health care systems have numerous conflicts of interest. In Australia, for example, a great deal of unnecessary but lucrative knee surgery and investigations are performed. Grommet operations (for glue ear) are common, but often not helpful. If such operations are tested did not attract extra revenue for the surgeon they would not be so commonly used.

Resources are always limited. In practice, to strengthen primary health care, especially in poor countries with a low tax base, means to take money from other parts of the health budget, unless it comes from other sectors, which are often much more powerful, such as defence. Softer targets, such as education, are vital for health and development.