‘The Stork is the Bird of War’: Reflections on the Rwandan genocide, written by John Guillebaud 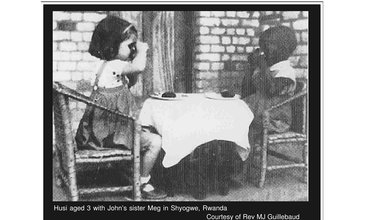 Husi, aged 3, with John's sister Meg in Shyogwe, Rwanda. Photo courtesy Rev M.J. Guillebaud.
John Guillebaud, the world’s first professor of family planning, reminisces on the tenth anniversary of the Rwandan genocide. See, also a link to some disturbing websites about Rwanda; will there be another genocide?

My friend Husi was killed just 10 years ago on 7th April 1994, on the first day of the world'’s fastest genocide. About 800,000 men, women and children died, just through being classified in a particular racial group.

I myself was born in what was then called Ruanda-Urundi, and spent my childhood in Rwanda - initially speaking Kinyarwanda in preference to English. Our family has 4 generations of association with the region, starting with my grandfather who translated the Bible in 1925. My parents worked as schoolteachers and in writing and translation work, from 1939 until their retirement in 1986. In 1995 they returned to Rwanda to assist in reconciliation work. Then after my father’'s death my mother joined my sister Meg in Byumba near Kigali, until she also died at the age of 86, helping to the last the widows and orphans of the area by teaching them a range of income-generating crafts.

When my father and Husi Kajuga’s father together opened Shyogwe secondary school in the northern country, Husi and his brother Wilberforce were playmates of sister Meg and myself. Husi later married a Belgian, Annie, by whom he had 3 children and when I visited him in the 1980s the brothers were running a successful import company in Kigali. But there was a deep rift in their family: the youngest brother Robert Kajuga came under sinister influences and eventually became the general of the infamous interahamwe, the roving Hutu killers of 1994. Sadly, but perhaps fittingly, he also died that year, from wounds received at a later stage of the dreadful conflict.

Why did it all happen? No single explanation can suffice. What is clear is that when Husi, Meg and I roamed the hills and valleys of Rwanda in the 1940s there were only 2 million Rwandans. By April 1994 when he and 60+ members out of 90 in his extended family were slaughtered, there were over 7.3 million. These population statistics have far more relevance than most commentators on the genocide have implied. The total wealth of this beautiful mountainous but tiny, resource-poor and landlocked country had increased somewhat in the intervening years. But the per person wealth (whether measured in francs or hectares or numbers of cows) had fallen … ... primarily because there were now so many more persons. Given hereditary enmity, worsened by colonial influences, between the two main tribal groupings, the Tutsi (15%) and the Hutu (85%), population growth hugely increased the likelihood of violence, by leading to intense competition for diminishing resources, especially land.

A catastrophe was predictable, indeed predicted, by a few. In the 1960s when there were 3 million Rwandans but with very high fertility rates, an expert group became concerned about how its people were to be fed. Later, in 1975, modelling exercises 1975 suggested ‘…... complete collapse in the population of this area during the 1990s’ [1].

More recent and even stronger evidence comes from a study reported by Andre and Platteau [2]. Their title says it all ‘Land relations
under unbearable stress: Rwanda caught in the Malthusian trap’. Theirs was an in-depth case study of a highly densely populated area in northwest Rwanda during the immediate pre-genocide period 1988-1993. ‘Acute competition for land in a context characterized by too slow expansion of non-agricultural income opportunities has resulted in increasingly unequal land distribution and rapid processes of land dispossession …. pervasive incidence of land disputes and the threat of landlessness have led to rising tensions in social relations and even within the core of family life, thus paving the way for ever more overt expressions of disharmony and violence. A connection between these ominous conditions and the civil war that broke out in 1994 is established’.

Yet, ‘the fact that so few people understood that the path followed by Rwanda was a blind alley still remains something of a mystery’ [2]. This general myopia was shared by officials, churches, NGOs and foreign donors, who persisted, as they still do elsewhere in Africa, in a ‘measure and hope to provide’ framework. Runaway population increase is seen as a ‘given’, something to be measured, with no suggestion of it being reducible: rather like someone who is about to be pushed out of an aeroplane calling out for an altimeter rather than a parachute! When I was last in Kigali in 2001 visiting my mother and sister, the population had returned to the pre-genocide total through natural increase plus in-migration and I was told by officials that they expected a doubling to 15 million by the mid 2020s. Can this really happen? In 1998, Andre and Platteau stated, ‘It is not rare, even today, to hear Rwandans argue that a war is necessary to wipe out an excess of population and to bring numbers into line with the available land resources’ [2, p40: footnote 41].

There is, surely, a better way, by preventing excess numbers in the first place, which must not and need not involve coercion. During my visits to Rwanda I meet many women (though fewer men) clamouring to learn about fertility control. Provision of education (especially for women) and holistic reproductive healthcare including available, affordable choices in voluntary contraception are measures that work [1,3]: the aim being that no Rwandan woman who wishes to use a contraceptive (tonight) lacks the means to do so.

Ironically, in 1991 ONAPO, Office National de la Population, had calculated that for each Rwandan franc invested in their family planning programme Rwanda would save about 16 francs by 2016 [3]. Subsequent events suggest that such investments are also
truly life-saving.