The regular work of the ACE (teaching computer and life skills to young adults) continues to be disrupted by the pandemic and the need for social distancing; however the staff of ACE have been supported for the last 18 months by the Karuna Trust, in the UK. In this time, they have been busy providing other forms of relief. Aryaketu has also been liasing with some of the Buddhist doctors in Nagpur; with their help he took some training as an ambulance attendant, hired a vehicle, converted it into an ambulance, installed oxygen cylinders, found a driver, and for a month provided ambulance services to some of the sickest and poorest people in Nagpur. (Photo to follow). [Note that we at BODHI did not provide any funds for that project; we weren't asked - it was, we think, mainly funded by the Karuna Trust.] In a country like Australia it would be completely impossible to do this so quickly - it would take years to do the training - but India is not like Australia; we are sure Aryaketu's initiative gave some hope and comfort in the desperate crisis India has recently endured.

Following a discussion with Aryaketu in June, 2021 (and a formal proposal - see below) BODHI Australia provided just over A$5,000 from our "welfare account" (funded by our advertisers, anonymous donors and the occasional donor who does not request a tax deduction) to provide relief packages to people such as Mrs Shantabai Bagade (see image and personal story below). There is still great need - although the Indian government is now providing food rations to many poor people affected by COVID some still "slip through the cracks". The food rations are staples such as chickpeas (channa), lentils (dal) and soybeans. (There are better provisions of rice and wheat, from the Indian government*.) Also included are sugar, turmeric, tea, cooking oil and spices (turmeric and mirchi powder). The packages also contained soap and in some cases sanitary items for women and girls. This project was administered by Aryaketu and his staff and team of helpers, who are available while their normal work remains disrupted. Aryaketu is also helping some people (eg some homeless) apply for a the ration card.

In all, BODHI's funds on this occasion reached and helped about 350 families.

* this comment may be revised, we need to check our notes. 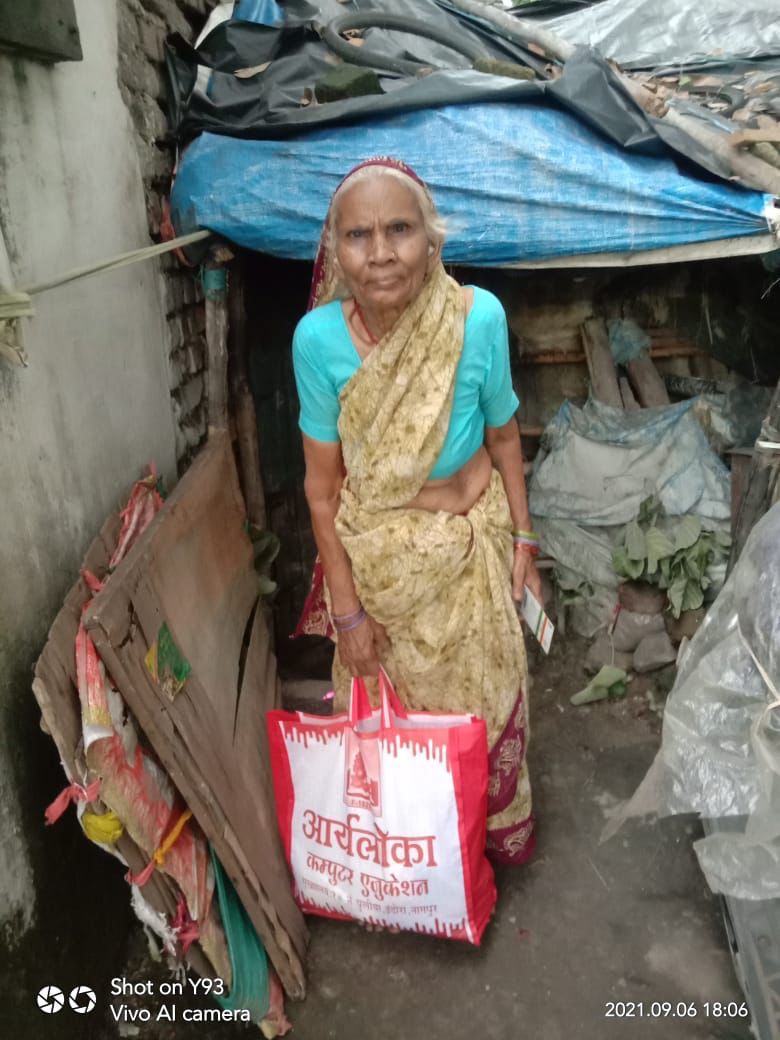 Photo and story published with permission. Text by Aryaketu (edited). Name: Mrs Shantabai Bagade Age: 80 years. She is staying with her son who is driving a rikshaw but not working well. She is living in a very poor quality house and in rainy season it’s a risk can collapse anytime. Both were Corona positive and were critical; they thought it was better to die because they do not have enough financial support to survive. She was very happy to receive the ration kit from Aryaloka Education Society so they can survive for one month. Later again there will be problem. Sometimes sleep with hungry. She has blood pressure, and needs daily medication.
See here for evidence of the bank transfer