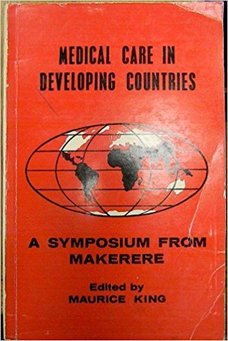 I first heard of Maurice's name in 1983, while preparing to go to Africa for 3 months, as a medical student, in 1985. My future supervisor there, Dr Philip Andrew, recommended that I read Maurice's edited book "Medical Care in Developing Countries", which I did. I found it second hand in a bookshop on Hunter St, Newcastle. It had a lot about poverty as well as much practical advice for providing health care in low-income settings.

In 1990, while studying at the London School of Hygiene and Tropical Medicine, for the Diploma in Tropical Medicine and Hygiene, Maurice gave a guest lecture to our class, on public health (hygiene is an old world for public health). On the same evening  I collared him in the basement lounge at the School, where we talked for three hours. Maurice saw high population growth rates in Africa as a dominant underlying reason for its under-development and poverty. He also perceived climate change as a major future risk.

Later that year I visited Maurice and Felicity in Leeds, where we discussed the draft of his article "Health is a sustainable state", soon after published in the Lancet. In 1992, Susan and I visited him, again in Leeds, just before Christmas. I remember a frozen  landscape from the train, and warm hospitality inside their terrace house.

Maurice's 1990 paper was initially well-received (according to Google Scholar, cited 250 times). But it was then savagely attacked. In 1994 I published my first article in the Lancet (actually my first full-length article in any medical journal) called "Overpopulation, overconsumption and economics" (The Lancet 343: 582-584). You can read it here, if you want: in it, I defended King.

I wrote, in part:

"Verkuyl did not claim that contraception alone will solve Third World problems, any more than King proposed the denial of medical care to children in developing countries as a means of avoiding closure of the demographic trap."

The Church’s provision of medical care in the developing world is a praiseworthy activity, but do Verkuyl’s critics such as Peeters and Kelly really believe that the Third World population can reach, say, 10 billion, and that sufficient global resources will be available to cater for the “wants of all”, including continuing Northern demand? Surely we have to accept that there is a limit to the earth’s resources and that global population must be kept below that limit. Is this goal achievable without either universal access to birth control or closure of the demographic trap?

My paper was published on March 5, 1994. A month after (April 6, 1994) marks the official start of the Rwandan genocide, later described as an example of demographic entrapment, and also as a Malthusian trap. Due to this paper Prof John Guillebaud contacted me later that year, during one of his visits to Australia to promote family planning.

Naturally, it is possible to find papers with completely different views, written, I submit, either by people who have not thought about the topic sufficiently, or who have not read enough, or have some ideological bias which stops them from listening and thinking clearly.

Below is from Kamran Abbasi's article in the BMJ, published in 1999. This described Maurice as "a visionary or a madman". For me, Maurice is definitely a visionary. I would add to this article by mentioning Maurice's immense contribution to the provision of medical education in low-income settings, building on his first book, with titles such as Primary Child Care and Primary Mother Care (see review by Tony McMichael, here).
"Born in 1927 in Ceylon (now Sri Lanka), King studied at Trinity Hall, Cambridge, and then St Thomas's Hospital, London. Initially, he worked as a pathologist, moving to Africa in 1956. While in Rhodesia (now Zimbabwe), he displayed his willingness to fight injustice. He objected to not being allowed to train black Africans; his employers did not renew his contract, and he left.

In 1962, he started at Makerere College in Kampala, Uganda, and, as he puts it, “jumped out of the Petri dish into the community.” David Bradley, professor of tropical hygiene at the London School of Hygiene and Tropical Medicine and a colleague in Uganda (who I have also met several times) recalls: “He volunteered to look after a remote mission hospital while the doctor took a fortnight’s holiday, and he was struck by the absence of literature to prepare him for it. So he organised a conference, took all the papers from it, and began to integrate them into a coherent whole. After 18 months of meticulously detailed work combined with profound intuitive leaps, there resulted Medical Care in Developing Countries, the bible of the primary health care movement.” The book has sold over 50,000 copies.

King formed many of his ideas on demography in those early days in Africa (“they were apt to come as I was going round a particular roundabout on my way home on my scooter”), though they had yet to develop into one cohesive vision. By 1985 he was teaching public health medicine at Leeds University, having spent most of his time in Africa working on various projects for the World Health Organisation, and was focusing his intellectual energies on primary health care. His other great cause at the time was nuclear disarmament, which he espoused with his usual passion.

In 1988, he was invited to give a lecture to the Royal Society of Medicine on the health of Africa. His interest in demography was ignited, and since then he has been one step ahead of the debate, championing ideas that have initially provoked outrage and then become gradually more widely accepted. This was the case with “entrapment,” then the Hardinian taboo, and is again now with his concept of the lockstep.

In 1990 he courted controversy with an article in the Lancet (discussed above). King posed the dilemma that an extra mouth to feed meant less for someone else in an entrapped community. The message was, he says, “public health measures for child survival don’t necessarily have to be put into practice, merely because they are possible.” Much to his angst, he was accused of advocating infanticide. He readily admits, though, that his ideas were not fully formed: “At that time I was still ‘tabooed’ over thinking radically about fertility. I had not yet faced up to one child families. I failed to realise that measures to increase child survival don’t have much effect on population growth.”

A conversation with King is heavy with terms like two wisdoms, the Hardinian taboo, policing the lockstep, disentrapment, and benign uproar. He is consumed by the need to address the population crisis, and the “overpowering evil” of the US State Department, which, in concert with other agencies like the United Nations, the World Bank, and the Roman Catholic Church, is actively, and often covertly, preventing population issues being discussed fully. In the case of the United States, he believes that the motivation is to prevent attention being focused on its over-consumption of fuel.

When King makes these claims, however, he distances himself from other demographers. Even Charles Elliott, master of Trinity Hall, Cambridge, longstanding friend, and coauthor on a previous BMJ article on the Hardinian taboo (BMJ 1997;315:1441-3), has decided not to sign up to King’s current offering (see pp 998-1001).

“He’s become unduly excited about the role of the CIA and there is a touch of paranoia about it. I think Maurice weakens his case by getting into this ‘metapolitical’ analysis,” says Elliott. “You can believe it, but that is different from making a watertight case.”

Elliott believes that King’s ideas are visionary but sometimes lack evidence: “Most professional demographers say he’s off the wall. I don’t think he is. He identifies the processes in action, but the fieldwork has often not been done.”

Malcolm Potts, professor at the school of public health at the University of California, describes well the dilemma that King poses: “There are people who think him extreme or even evil. I think he presents us with difficult problems many people do not want to face. We might come to different conclusions, but I don’t think we can escape the issues he presents. My experience is that Maurice King wants to start a debate, not single- handedly establish a policy. The obligation of people who disagree with him is not to condemn him, but to review the facts and suggest alternatives if they exist.”

At face value, King is obsessed with imposing a one child world and is paranoid about the role of the United States. A closer analysis reveals a deep affection for Africa, and a missionary zeal—bordering on the manic—to surmount the problems of overpopulation. Few innovators get it right every time. But King is a visionary with a touch of creative madness. That means it’s time for benign uproar.